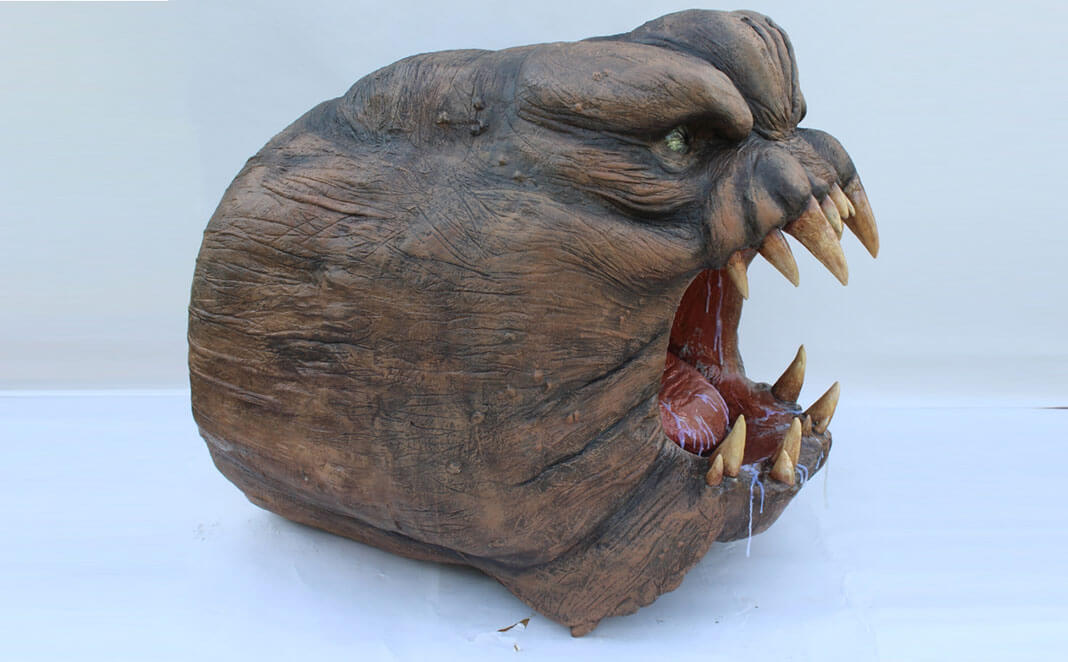 I’m really excited to tell you about my latest project! I was contacted by a client from California who wanted a life-size replica of a Star Wars Rancor monster from the move Return of the Jedi! To say I was excited would be an understatement. I had been wanting to make a Rancor for years, and I was glad for the opportunity.

Now that I had the project, I needed to determine how to give the client what they wanted. The client had display restrictions, because the building he was displaying his props in was already filled with other great Star Wars figures so, he decided that the only place left to go with his displays was…UP! He wanted the head coming out of a loft overhead along with the hand! The pieces would be displayed as if the creature is tearing through the roof of the building and coming in to attack! I thought this was an ingenious way to solve the problem of no floor space to display another figure.

To build a piece like this I always start with lots of reference materials from the movie, such as photos, concept art, and if I’mlucky, a few notes about the dimensions of the original creature. One piece of info that was invaluable to me was in the movie the creature eats a Gamorrean guard, a humanoid pig creature. The Gamorrean guard in the movie was portrayed by an actor wearing a costume so, going from that point I was able to determine the size of the Rancor’s mouth and head.

Next, I had to scale the head out so that the proportions were correct while keeping in mind the spot the head had to finally fit into. The final size would be 4 feet x 4 feet. So, I started carving the piece from styrofoam, building out the overall form. I just carved and shaped the styrofoam head down until I was satisfied with the look.

The teeth for the figure were cast from resin, and to save time, I made molds of the teeth so I didn’t have to sculpt each tooth. I could then cast as many teeth as I needed. Also, the eyes were hand painted acrylic domes.

When I was satisfied with everything, I covered it in an acrylic paste to give it strength and texture.

The hand was constructed the same way, using foam to build the form then using the acrylic paste to build the texture.

Want A Sneak Peek of How I Created the Rancor Styrofoam Head?

I’d like to give you a behind the scenes look at the progression of the Rancor head from a block of styrofoam to the finished piece! 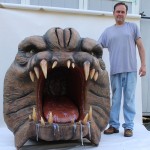 What a great project! The Star Wars geek in me got to fulfill a lifelong dream of making a life-size Rancor head and arm! Its projects like these that get me up in the morning and I’m glad I could share the experience with you. Before you go I’d like you to do two things:

1. Go ahead and grab your free copy of the Rancor head progression.

2. Leave me a comment below letting me know what you thought about this project!