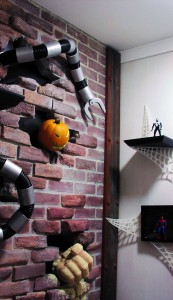 It was around last October when my wife suggested that for my birthday, she would be doing a “Spiderman” theme for my bathroom.  Spiderman is, by far, my favorite super hero of all time.  I’ve got from Spiderman figures to posters to this and that.  Anyways, I initially thought it was going to be cheesy, red and blue walls, stuff like that.  She even asked who my top Spidey villains were.

Little did I know how these villains would be incorporated to be a piece of what is now referred to as the “Spidey bathroom.”  One of my wife’s clients, Richard, designed and made a wall with some of Spidey’s well known enemies.  The wall is of brick, and has these enemies breaking through the wall.  Doc Ock’s tentacles are bursting through, the Sandman’s fist has broken through with sand all over, the Goblin’s pumpkin bomb flying through, and the Lizard peeking through one of the cracks.

Lastly, I am pleased with my Spidey villain wall.  Ever since its erection, the wall has been shown to family, friends, and whoever comes by.  The wall is something else.  It is a one of a kind of art piece.  And it has become a catalyst to the ever changing “Spidey bathroom.”

Want to stay up to date on what’s happening at Riley Replicas? Sign up below!